On 10 December 2018, Settlement Council of Australia attended the Human Rights Community Forum: “UDHR 70 years on, time to act?” hosted at the National Library of Australia by the ACT Human  Rights Commission. The event was supported by the United Nations Information Centre (UNIC), Amnesty International Australia and Australian Lawyers for Human Rights.

10 December marks the 70th anniversary of the Universal Declaration of Human Rights (UDHR), which was proclaimed by the United Nations General Assembly in Paris, 1948. It set out, for the first time, fundamental human rights to be universally protected and it has been translated into over 500 languages.

In Australia, the ACT was the first jurisdiction with a Human Rights Act in 2004, followed by Victoria in 2006.

The event was launched by an introduction from Dr Helen Watchirs, President of the ACT Human Rights Commission, followed by Mr Christopher Woodthorpe, UNIC.

In his heart-warming speech, former High Court Justice Michael Kirby, emphasised the importance of education about human rights at schools (especially in the early age of children). He described his vivid memory of the moment, when at the age of 10, he was given a copy of UDHR by his teacher – the document was small enough to be carried in his chest pocket, close to the heart, and became an important focus for his and his classmates’ education. You can read more about this story in a recent article in The Canberra Times.

The keynote presentation was followed by a dynamic panel, moderated by respected ACT personality Genevieve Jacobs. The speakers on the panel, The Hon. Michael Kirby AC CMG, former High Court Judge, Fr Frank Brennan SJ AO, CEO of Catholic Social Services Australia, Mr Thomas Albrecht, UNHCR Regional Representative and Ms Claire Mallinson, National Director of Amnesty International Australia, discussed the global impact of UDHR since its enactment, the Australian legal framework and the reality of its human rights protection, as well as Australia’s global role in this matter. The speakers of the panel were unanimous that the development of a national human rights charter would have a significant meaning in terms of effective human rights protection in Australia, as has been proven by the court use of the ACT’s and Victoria’s human rights bills.

Even though the overall situation of human rights protection in Australia is good, it was pointed out that Australia’s international approach to human rights is at times inconsistent and that change in our approach, starting with a national charter or bill of rights, was necessary if Australia is to be taken seriously in this matter.

The feedback of the audience was extremely positive and the speakers were awarded with a loud applause.

SCoA sends its thanks to the organisers of the event and congratulates them on hosting a successful event. 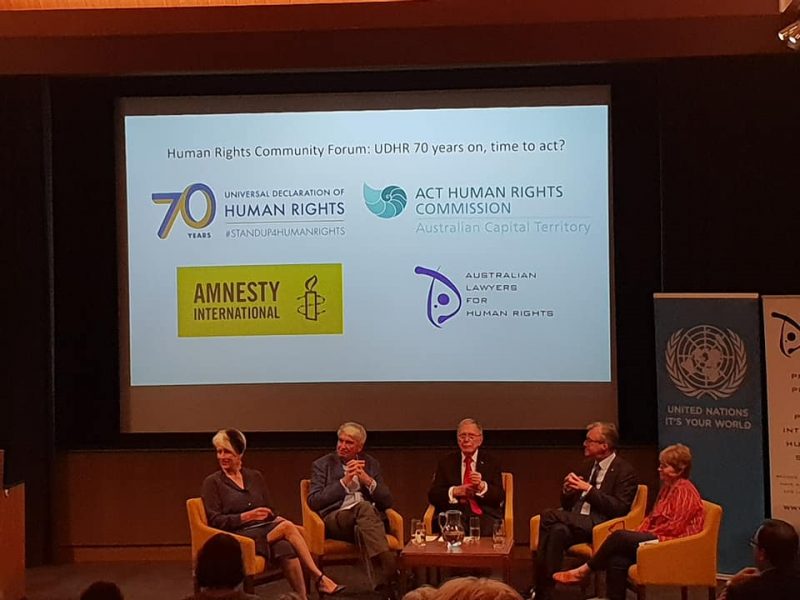