Building a New Life in Australia (BNLA): the Longitudinal Study of Humanitarian Migrants

Building a New Life in Australia (BNLA): the Longitudinal Study of Humanitarian Migrants

Building a New Life in Australia (BNLA): the Longitudinal Study of Humanitarian Migrants is a government funded long-term project researching how humanitarian migrants settle into life in Australia.  Originally funded for five years but now an ongoing project, the fourth wave of data was made available to authorised users in November 2018 and the fifth wave is expected to be made available later this year.

In December 2017, the Department of Social Services (DSS) released a report on the findings from the first three waves of data. DSS has recently released a Wave 4 Update as an addendum to the original report. The Update continues the story of the group of migrants BNLA is following, showing their outcomes in learning English, education, employment, income and financial stress, health, and community support and participation in their fourth year as permanent residents in Australia. It includes tables and figures which replicate those in the Wave 3 Report with the addition of the wave 4 data. The original report and a related infographic as well as the Wave 4 Update are available on the DSS website.

Anyone interested in applying for the BNLA data can do so on dataverse.ada.edu.au/dataverse/ncld . 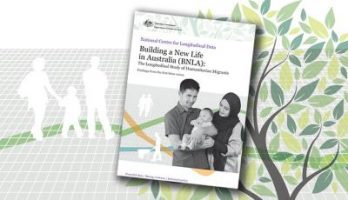