Working in partnership with the North Eastern Development Association (NEDA) and the Syrian community leaders, Anglicare SA, facilitated the participation of 18 newly arrived Syrian refugee men (aged between 35 and 45) in a building and construction course, earlier this year.

The Syrian community arrived in Australia 18 months ago as refugees. The majority of this group was supported by Anglicare SA through our refugee housing program when they first arrived in Australia. Most of the men hold previous qualifications in building and construction (tiling, painting, brick lying), track drivers, and as handy men. Others hold various professional qualifications as well.

The Syrian training is one of its kinds in SA. What makes it unique is the tailoring of the course content and the delivery style. NEDA customised the program to integrate the prior skills attained by the trainees in Syria and accounted their non-English speaking background. Anglicare SA provided an Arabic speaking interpreter to support the group and facilitate communication between the instructors and the trainees. The interpreter was also awarded a building and construction certificate for attending 100% of the course. The practical training course was aimed at increasing participant’s skills and employability, and included skills such as Tools & Equipment, White Card, Concreting, Demolition, Scaffolding, and Carpentry.

This project aligns with Anglicare SA’s mission and strategic objective of improving the wellbeing of vulnerable people and fulfils our role of active advocacy for refugees. The Adelaide Advertiser featured the trainees’ graduation story during Refugee Week.  An employer saw the story and contacted the college with an offer to employ four of the trainees.  Anglicare SA, is continuing to work in partnership with North East Vocational College and Australians for Syria SA to support the other trainees to gain employment. 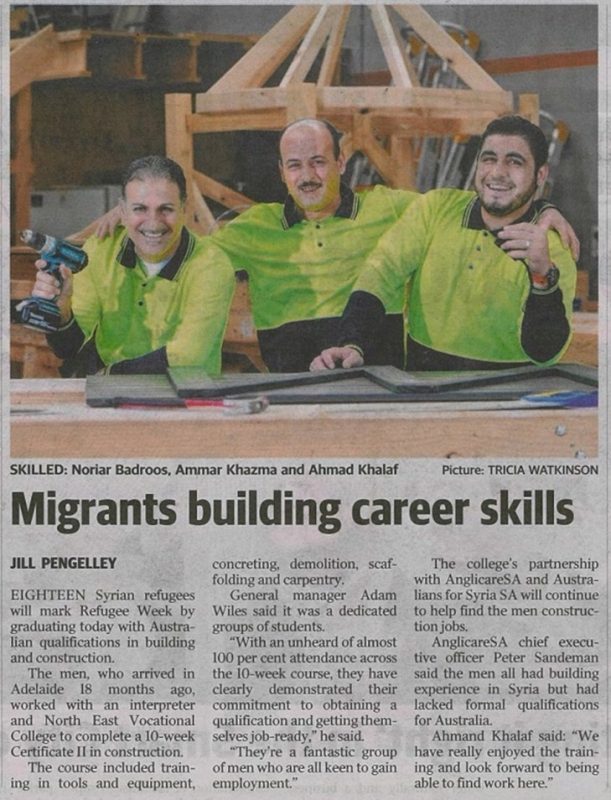