Find answers to all your frequently asked questions.

Settlement is a dynamic, multi-faceted, ongoing process of people’s transition moving to a new country. It is a two-way process for both the settlers and their new communities. 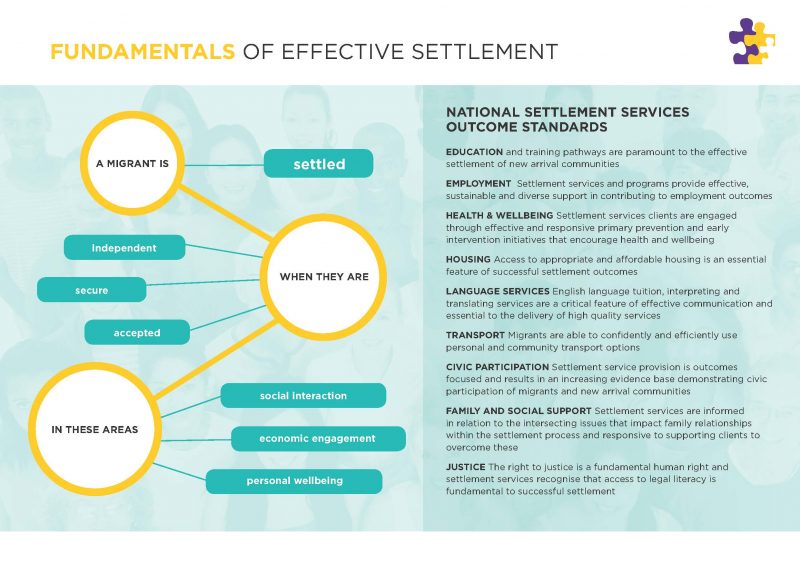 What are Settlement Services?

Settling in a new country can be a stressful process. Settlement services are a range of services aimed at supporting people of refugee backgrounds and newly arrived migrants. Our members include agencies, large and small, who are committed to the successful settlement of refugees and migrants across the country. Their services range from greeting new arrivals at the airport, through to assisting them to secure housing, access services and find their first job.

How do Australia’s settlement services compare with the rest of the world?

States like Australia that offer settlement services to assist with resettlement provide legal and physical protection, including access to civil, political, economic, social and cultural rights to refugees and migrants that are similar to these services provided to their citizens.

Settlement services provided by Australia are world class and include a range of support programs and services that very few other countries provide. Whilst there is always room for improvement, Australians can be proud of the support we provide to help assist newly arrived people from refugee and migrant backgrounds to settle in Australia.

Who is a refugee?

Asylum seekers or refugees and migrants have very different experiences and reasons for moving to another country.

Asylum seekers and refugees, on the other hand, flee their country for their own safety and cannot return unless the situation that forced them to leave improves.

Under international law, a person becomes a refugee at the time the person fits the definition of refugee.

The United Nations Convention relating to the Status of Refugees, as amended by its 1967 Protocol (the Refugee Convention), defines who is a refugee and sets out the basic rights that countries should guarantee to refugees. According to the Convention, a refugee is a person who is outside their own country and is unable or unwilling to return due to a well-founded fear of being persecuted because of their:

The term ‘asylum seeker’ is used to describe people who has fled their own country and applied for protection as a refugee, but whose claims have not yet been recognised by a government.

What are Australia’s human rights obligations in relation to asylum seekers and refugees?

Australia has international obligations to protect the human rights of all asylum seekers and refugees who arrive in Australia, regardless of how or where they arrive and whether they arrive with or without a visa.

While asylum seekers and refugees are in Australian territory (or otherwise engage Australia's jurisdiction), the Australian Government has obligations under various international treaties to ensure that their human rights are respected and protected.

These treaties include the International Covenant on Civil and Political Rights (ICCPR), the International Covenant on Economic, Social and Cultural Rights (ICESCR), the Convention against Torture and Other Cruel, Inhuman or Degrading Treatment or Punishment (CAT) and the Convention on the Rights of the Child (CRC). These rights include the right not to be arbitrarily detained.

As a party to the Refugee Convention, Australia has agreed to ensure that asylum seekers who meet the definition of a refugee are not sent back to a country where their life or freedom would be threatened. This is known as the principle of non-refoulement.

Australia also has obligations not to return people who face a real risk of violation of certain human rights under the ICCPR, the CAT and the CRC, and not to send people to third countries where they would face a real risk of violation of their human rights under these instruments. These obligations also apply to people who have not been found to be refugees.

How many refugees does Australia grant permanent protection to each year?

Under the Australian Department of Immigration and Border Protection’s (DIBP) Humanitarian Programme, Australia accepts a certain number of people every year who are refugees or have special humanitarian needs.

The Humanitarian Programme intake numbers are set each year. These numbers are influenced by UNHCR assessment of resettlement needs overseas, the views of organisations within Australia conveyed during community consultations and Australia’s capacity to assist.

In addition, asylum seekers who arrived in Australia without a valid visa (prior to offshore detention policies being implemented) but are not transferred to Nauru or Manus Island may be granted Temporary Protection Visas or Safe Haven Enterprise visas.

Where do Australia’s refugees come from?

In line with global resettlement needs the top regions Australia’s refugees come from include: Asia, Middle East and Africa. Under Australia’s Humanitarian Programme 2015-16 refugees’ countries of birth were: SOURCE: DIBP

Why become a member of SCoA?

SCOA offers a strong voice for settlement service providers across Australia, lobbying government to influence settlement policy, as well as working tirelessly to promote the capacity and capability of the sector, organise training and networking opportunities and foster innovation in settlement service delivery. Being a SCOA member provides you with the opportunity to: Click for more information on Member Benefits.

Who can be a member of SCOA?

SCoA is the peak body representing over 97 of Australia’s leading settlement service providers. Our members include agencies, big and small, who are committed to the successful settlement of humanitarian migrants across the country. Their services range from greeting new arrivals at the airport, through to assisting them to secure housing, access services and find their first jobs. SCOA’s aim is to provide leadership for the sector and represent a unified voice for the many and varied organisations providing settlement services across the country. We take this task seriously, and attempt to ensure that in all of our dealings with government and other stakeholders, our members’ interests are promoted as being of paramount importance. There are two types of SCOA membership: Full and Associate. Full membership of entitles the organisation to vote at SCOA General Meetings and to nominate a representative of the organisation for membership of the SCOA National Executive. Being an Associate Member entitles organisations to many of the benefits of Full Members, but Associate Members cannot vote at General Meetings or nominate a representative for membership of the National Executive. To apply to become a member, please complete an application form.  For more details about membership, click here to go to the membership page.